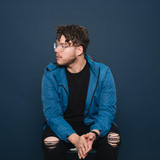 If you were to compile a list of Wyoming natives currently writing and producing commercial pop songs in a town historically known for Country music, H. Kenneth would surely be near the top. After graduating from Central Wyoming College in 2007, the songwriter/producer relocated to Nashville, Tennessee in pursuit of a creative career in the creative music industry. Combining roots in rock, an education in vocal jazz performance, and an obsession with pop music; the Top 40 songwriter/producer has made his mark. As an artist and collaborator his songs have accrued more than 50 million streams across various platforms worldwide and have appeared in nearly 200 placements across TV and film. His songs have been used in a myriad of advertisements including ads by tech giants Google, Apple, and Netflix. His knack for vocal production combined with a unique approach to songwriting have brought forth collaborations in the U.S. and abroad. Notable collaborators include Sleeping With Sirens (‘Gossip’, Warner Brothers Records, #38 Billboard) German DJ Alle Farben (‘Sticker On My Suitcase,’ Sony Records Germany) and Korean Kpop superstars Treasure (YG Entertainment). Unlimited by genre, H. Kenneth continues to push the limits in both his solo endeavors as well as those of his collaborators. Not bad for a kid who grew up in the land of tumbleweeds and Antelope.