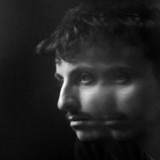 A single voice among millions of others, a loner. After wandering around in few post rock bands in Rome's hinterland as guitarist and producer during the 2010s, multi instrumentalist Bob Hermit lands to his solo project (launched by the Italian collective Misto Mame in 2017) which sums together songwriting and noise music, experimentation and shoegaze, attempting to condense all the previous experience as poet and music composer into a dense and intimate style, heavily influenced by contemporary electronic and pop music. The album Songs of Defeat (BohReal? Records, 2021), following the release of the singles Ladybird, Missed Call (feat. Jónína Rebekka) and 2903, is the first organic collection of material that leads the way for the next sound to come.