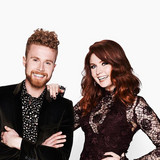 Finley and Isla Brentwood are a pair of Kiwi singer-songwriters based in Melbourne, Australia, well-known for their melodic, stripped-back style with crisp harmonies to die for. The Brentwood siblings gained viral notoriety with their crowd-pleasing acoustic take on the ‘Deadpool Rap’, catching the eye of star Ryan Reynolds and ultimately featuring on ‘Deadpool Reloaded’, the soundtrack for the motion picture. BRENTWOOD went on to impress the Australian and New Zealand public after their first appearance on 2016’s ‘The X Factor Australia’. As the first act to receive a standing ovation, they set the bar high for the competition. The proudly ginger siblings didn’t disappoint – under the wing of mentor Iggy Azalea, they won over fans week after week, ultimately finishing in the Top 7. Their latest musical journey sees BRENTWOOD extend themselves beyond their acoustic roots and explore a fuller pop sound, with their self-titled EP. The siblings traverse love, loss, escapism and anxiety with their signature harmonies and a new pop-driven direction.