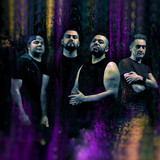 Neshiima are a Glaswegian heavy rock band who’s influences of electronica, rap and metal make them stand out from the crowd. 2013 was the year Neshiima were unleashed to the Glasgow rap metal scene. Fast forward 5 years and 2018 saw the group release the 1st and 2nd of 3 EPs, 'Purple' and 'Orange', bringing with it heavy rotations on Kerrang! and Scuzz TV. This year sees the band complete the trilogy with new EP 'Green' They capped a very successful 2018 with a nomination for a Scottish Alternative Music Award in the ‘Best Metal’ category. With so much happening with Neshiima at the moment it's hard to forget that they also made their Download Festival debut this summer performing in front of 3000 Doghouse revellers and received a stunning 10/10 performance review from the festival website. "This 4 piece from Scotland may have come a long way to play but there's no doubt they'll have much further to travel in the future"