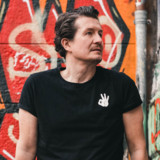 liquidfive is releasing its ninth single this year with “Drown”, a song that fits perfectly into autumn, a mix of dance, pop and electro with an atmosphere that will make you dance! “I had the idea for the song in the drawer for a long time, but somehow I never liked the backing and the sound until I recently developed an idea that I was happy with and said ´DONE´ - ...now here's my new song. I very much hope that you like it and look forward to any support. This time there is also a club mix for all those who don't get the extended hit enough for the dance floor." liquidfive - DJ. Producer. Musican. Songwriter. “Martin Maximilian K.” has always had a big love of music. In 2011 he founded a band project called liquidfive. Following a string of releases he realised his heart was only in Dance / Pop music and became a Producer / DJ. In 2011 he met well known Producer, Musician, Songwriter, Jaxon Bellina. This led to the joint founding of 5L - Records. The liquifive label ethos is danceable Electro Pop, cooperation with young and established artists. The releases have so far included "We´re Just People", "Feel Alright", "Head Full Of Summer", "Bright", "Bongo Cha Cha Cha (Summer Beat)", "Baby, it´s alright", "WHOM!", "Thinking About You", "Never Ends", "Stars", "Dance Away", "Only You", "One Chance", "Young", "Alive", "Depth Of Your Love", "So In Love", "Sweater Weather", "Freedom" & many more. The track "No Sugar" has lived in the Major UK Pop Club charts for months.