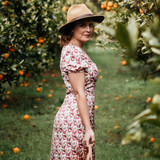 "2020 has bought a new wave of inspiration resulting in some of the most moving songs I feel have ever come through me, the songs for the animals. Brumby, 106, Hoping and All The Same are my greatest gifts to this world and I hope with all my heart they touch yours." 27 year old Katie White is from a very small town in Western Australia and started her career at age 14 when she supported The Waifs in-front of thousands of people. She has taken her music as far as London, toured around Australia and played hundreds of gigs in her 10 year career. She has also been nominated for 5 WAMI song of the year awards and won in 2016 with her song River. Katie has released 4 records in her time, all of which are original music written and arranged by herself.

Recently, Katie has worked with Joel Quartermain of Eskimo Joe in Melbourne to record and produce 2 stunning singles, and in May 2019 she opened a sold out Waifs concert for the second time. Katie's ultimate gift is her voice, which has the ability to move people very deeply, sometimes making them cry, and always leaving an imprint in their hearts. Her voice is her own, rich, soulful, warm, and unforgettable. Her songs are poetic, honest, and touching. She is not afraid of talking about the rawness of things and goes there with her honest style of writing. Katie's music is the kind that will stay with you long after the show is finished.