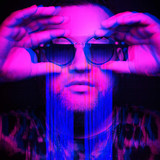 Droze is an 80's child raised by the radio, and schooled by R&B and Soul tracks from that era. While bouncing around NY and Miami as a child, Droze found escape from his rough upbringing in the harmonies of such groups as SWV, Total, Brownstone, and Brandy. His musical background includes 12 years of classical training on 4 different instruments, and while he's always been a singer inside, it hasn't been 'til recently after signing with his longtime friend recording artist Michael M for management that he's found a voice to share with the public. While his drive and focus is to bring back a heavy soulful sound to a range of musical styles, his current project includes a deep love for house music. With a big voice and an easily recognizable vocal style, Droze's sound is infectious. Ad libs are almost as free flowing as lyrics and he has been compared to the power house vocalists of early 2000's club music. You can hear these influences on the two Danny G tracks, Never Stop and Running (Out Of Time) to be released on Gonna Be Records in 2015. Humble, easy-going, and always on the go, it's not hard to predict that Droze's sound is sure to take him far. https://geo.itunes.apple.com/us/album/the-droze-project-ep/id1177760058?app=itunes GonnaBeRecords@Gmail.com