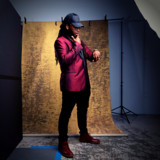 Broward County continues to prove itself deserving of being mentioned among the meccas that produce dynamic artistry. As an indisputable example, Yeshua Royal, delivers raw yet refined melodies of passion. As with countless artists, his musical journey was given life within the church, his was particularly birthed on a drum set at just 12 years old. His tenacity and talent then took the form of gritty raps cultivated in a Sunrise city garage at 15 years old. That catalyst led to years of refinement that led to a South Florida tour with 99 Jamz, programs geared to inner city youth such as Men2boys mentorship, and even a Grammy Showcase in 2015. After witnessing the death of his mother in 2016, an event that could’ve snuffed any flame, Yeshua clawed through the throes of mental health to birth his own independent musical efforts. A week later he was on stage performing for a crowd of at risk students. A month later he released “Mr. Uncle Sam.” A gritty ballad questioning the state of American Society. In 2018, Yeshua unleashed “One Mo Gin”, another stand out effort that was rooted in soul -reminiscent of a James Brown baseline. In 2019, he released "If the Crown Fits" a taunting 8 song EP that proved he is deserving of a crown. “Keep it On Me” is the most recent record that gripped South Florida. It unabashedly shouted his beliefs, contrary to the current political and societal climate. With gusto, Yeshua claims his art is an audible depiction of Royalty. Welcome to Royalty👑