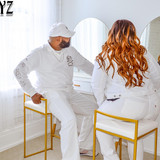 Jay Wiz and E. Renee make up the recording group known as CrayZ, taking after their last name of James and Erica Renee Crayton. While Jay is a producer, and engineer, E. Renee is a gifted vocalist and also well versed in playing cello and bass. Their styles and delivery complement one another Remarkably, keeping your attention at all times. Before marriage, they were each a force in their own right. Jay gained notoriety performing in clubs and battles. E. honed her vocal skill originally in church and music theory classes in high school. Both made names for themselves. Unfortunately, after a stint of working with producers unconcerned with her best interests, E decided to ignore her talent for a time as many of her musical interactions left her with negative impressions. Jay’s music would slow as well as he was distracted by fast living and many run-ins with the law. It wasn’t until months of dating that Jay discovered E. was a talented singer. After learning this, he would have E. contribute her voice to hooks and collaborations. She then earned respect lyrically by demanding to be featured on songs as a rapper. Her delivery, reminiscent of artists such as Nicki Minaj and Megan The Stallion, brings personality and character as she aims to bring empowerment to women of all backgrounds through her music. She highly compliments Jay Wiz’ rhyme patterns and style as he gives his listeners a contemporary sound that could put you in the mindset of hearing Royce Da’ 5’9 and Nas.