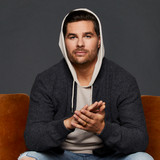 Since moving to Nashville in 2004, award-winning country artist Steven Lee Olsen has worked tirelessly, honing his craft as both a singer and a songwriter, and all the hard work has paid off in some pretty impressive ways. He co-wrote Keith Urban’s double-platinum hit “Blue Ain’t Your Color” – which in 2017 was named the NSAI Song of the Year and crowned “Single of the Year” at the CMA Awards, in addition to being nominated for “Best Country Song” and “Best Country Solo Performance” at the 59 th Grammy Awards, and “Song of the Year” at the ACM Awards. Olsen also penned Kip Moore’s #1 hit “More Girls Like You” and co-wrote Dallas Smith’s #1 Platinum hit “Drop” as well as numerous cuts for other stars including Garth Brooks, Billy Currington, Rascal Flatts, The Judds, Emerson Drive and more.

Next up for Olsen is a multi-day, multi-track digital release, culminating in the delivery of his new single “Can’t Not” on March 20th. The campaign kicks off with the March 6th release of “Talkin’ About Last Night”, followed by “If You’re With Me” and “Unhappy Hour” on March 13th. “Can’t Not” follows Olsen’s previous released Top 10 single “Hello Country”, which was the most added song at Canadian country radio during its debut week and garnered the attention of Pandora who named him one of their 2019 “Artists to Watch”.