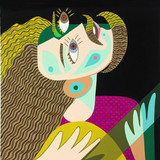 Andrew York is one of today’s best loved composers for classical guitar and a performer of international stature. His compositions blend the styles of ancient eras with modern musical directions, creating music that is at once vital, multi-leveled and accessible. Andrew received a GRAMMY as a member of the Los Angeles Guitar Quartet during his sixteen years with the cutting-edge ensemble, and his compositions have been featured on other GRAMMY-winning recordings. A love of music was instilled at an early age; Andrew’s father is a guitarist and his mother a professional singer. Family reunions abounded with folk music ranging from frontier American to English and Celtic traditional songs. Andrew crosses over stylistic boundaries with an unusual authority - besides his classical contribution, he also has an extensive background as a jazz guitarist. Andrew says “When I write I feel a connection to my spirit and the joy and sorrow of life.

My entire life comes into focus and there is no separation between me as a boy, a young man and now in my later years.” Andrew received his Master of Music degree from University of Southern California, and is the only USC graduate in the school’s history to twice receive the Outstanding Alumni of the Year Award in 1997 as a member of LAGQ and in 2003 as the sole recipient. Andrew is a member of the Triple Nine Society, and since 2018 he is also a voting member at Recording Academy / GRAMMYs. www.andrewyork.net www.andrewsden.com