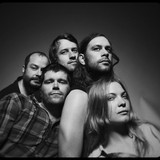 Campdogzz capture the bleak yet spirited heart of the industrial midwest in a five-piece band propelled by driving rhythms, insistent dual guitars set in intriguing arrangements, and the haunting, evocative songs and voice of Tulsa native Jess Price. Campdogzz have earned a devoted following in Chicago and the midwest, with a lineup featuring Jess Price (lead vocals, guitar and keyboard); Mike Russell (guitar and backup vocals); Nick Enderle (guitar); Andrew Rolfsen (bass); and Chris Dye (drums). In addition to their own headlining shows and tours (until recently conveyed by a school bus rigged for self-sufficient touring and camping; if you don’t know where to get the best falafel in every American city, you are definitely not a Campdog), the band has opened for Big Thief, Sam Evian, Ohmme, Tim Kasher/Cursive, and others. They were recently seen in the first season of the Netflix series, “Easy,” recorded a popular Audiotree live video session, and self-released “Riders in the Hills of Dying Heaven” in 2015. That early recording has been streamed nearly 2 million times. Now, Campdogzz are poised to come aggravate your blues, bang your head, and remind you where you are on the long road away from home. Their latest album "In Rounds" was released on 15 Passenger Records in 2018.