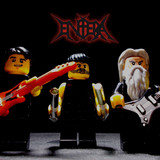 German cult Thrash Metal band ENTERA has been hitting the stages since the early 90s. Always loyal to a sincere, direct style, the band from Nuremberg has developed their own signature sound trough more than 30 years. The more than 300 concerts are a clear sign that they know their business. Besides their Thrash Metal roots, listeners can also find influences from Death or even Power Metal. Not a surprise that after all this time their releases still create great expectation between their fans. Every CD sounds different and shows the potential of the band. To celebrate their 30 years of career, ENTERA released in May 2020 their new album “Hate Factory”. 12 Songs, direct and without tricks, for lovers of old school Thrash Metal. booking: entera@entera.org www.entera.org