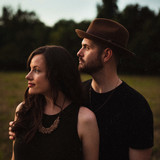 Drakeford are a husband and wife singer-songwriter duo based in Nashville, TN. Made up of a Brit and an American, the world-traveling duo's music is folksy at heart with hints of pop throughout, with the finger-picking style being as clear and crisp as the vocal articulation. They manage to repeatedly deliver quality both in musical ingenuity and lyrical depth. Their first two full albums, Anchors Aweigh and The Venture, both received outstanding reviews and took them on tour all over the United States and Europe, performing at festivals, Universities, houses, coffee shops and everything in between. Their melodies are memorable, and the harmonies hypnotic. Drakeford and Lucy-Jayne first met in 2011 in the small country of Kyrgyzstan, and they later lived in the Near East for a few years, traveling and doing street performances with a musical group. In 2014 they moved back to the States where they got married, started touring, recording and even writing for other artists. The first half of their 3rd album (Wayward & Home Part I) is out now!