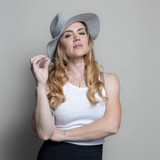 This far into her stellar career, Vanessa Amorosi remains one of the most exciting singers on the planet. Her song-writing and dynamic vocal range have seen the artist sell over two million records worldwide. She has released 6 commercially and critically acclaimed studio albums, received sixteen ARIA and APRA nominations, and stopped the world in it's tracks with her performance of ‘Heroes Live Forever’ and ‘Absolutely Everybody’ at the Sydney Olympics. In 2019 Vanessa released her 5th studio album ‘Back To Love’ followed by an Australian solo tour and successful festival tours 'Red Hot Summer Tour' and 'One Electric Day’. In March 2020, Vanessa released her first single 'Coming Down Off You’ from her album titled 'The Blacklisted Collection'. Having earned her place as one of Australia's most iconic female artists, 'The Blacklisted Collection', was her first record as an independent artist and showcased a rawness and intimacy not heard before. In 2021 Vanessa will return with her most compelling work to date. Following overseas opportunities, Vanessa permanently re-located to Los Angeles in 2010 to work in Gospel music; song-writing and arranging for world renowned producers and studios across the United States. It’s this experience that has led Vanessa to the next chapter in her career as a Soul/Gospel artist. The release of ‘Volume 1’ in March 2021 is the beginning of what’s to come.