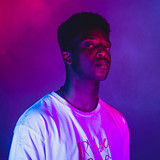 Busting through in 2014 like a Down Under answer to Wiz Khalifa or Kid Cudi, Australian rapper Citizen Kay was born in Ghana, Africa. His family moved to Canberra, Australia, where he grew up loving hip-hop and started rapping under the name of Kay. In 2013 he released his debut single, "Yes!," as Citizen Kay, a name that was also printed on the follow-up singles "Manage" and "Raise a Glass." A year later he released his debut effort, Demokracy, and partnered with the Australian electro crew Vengeance for the club hit "Haters." ~ David Jeffries