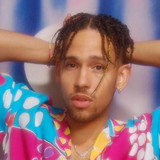 NoMBe intermingles hip-hop, rock, funk, house, and pop into a simultaneously ponderous and powerful sound of his own. Growing up in rural Germany’s wine country, he started producing at 15-years-old. He settled in Los Angeles where he launched his career in 2015 sparked by the single “California Girls.” NoMBe’s 2018 full-length debut, They Might’ve Even Loved Me, illustrated the scope of his vision. Beyond racking up hundreds of millions of streams, he earned praise from NPR, Billboard, Afropunk, WWD, Complex, and Flaunt Magazine. Elton John featured him in Rocket Hour, and Pharrell Wiliams championed him on OTHERtone and selected “Can’t Catch Me” as the theme for his HBO documentary series OUTPOST. Other syncs followed on Shameless, Ozark, The Mighty Ducks: Game Changers, Marvel’s Cloak & Dagger, The Resident, Ballers, and in Kylie Jenner’s Life of Kylie. Leaving audiences begging for more, he supported the likes of Bonobo and alt-j on tour and graced the bills of major festivals a la Lollapalooza, Firefly Music Festival, SXSW, Outside Lands, Bottlerock, Electric Forest, Okeechobee, and Lightning in a Bottle Festival. Right out of the gate in 2021, his second full-length offering CHROMATOPIA garnered acclaim from PAPER Magazine, American Songwriter, and OnesToWatch for its seamless distillation of influences as wide-ranging as Final Fantasy, Zelda, classical music, 1980s popular culture, Japan, Daft Punk, and “an open relationship I’d been in for many years.”