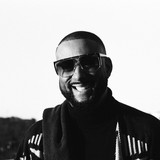 Describing himself as "a DJ first, producer second, and MC last," Madlib is the primary alias of Otis Jackson, Jr., who has become one of the most celebrated, prolific, and eclectic artists in hip-hop since emerging on the scene in the early '90s. Also known as Quasimoto, Beat Konducta, and Yesterdays New Quintet, among his dozens of handles, the unique sound and feel of Madlib's work -- created primarily without computers, using old-school recording and sampling gear -- has made him a valued collaborator with a number of leading hip-hop performers, and a widely praised figure in the underground rap community. There are many highly regarded albums in the vast Madlib discography. These include the Lootpack's Soundpieces: Da Antidote! (1999), Quasimoto's The Unseen (2000), Jaylib's Champion Sound (2003), and Madvillain's Madvillainy (2004), as well as Piñata (2014) and Bandana (2019), his two LPs with Freddie Gibbs.