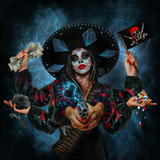 Legends and innovators of the Southern California punk scene, The Offspring have seen massive global success. Singer Dexter Holland, guitarist Noodles, drummer Pete Parada and bassist Todd Morse. The story began when their punk pop sound became a popular sensation in 1994. The Offspring released their self-titled debut album in 1989. Four years later, their 2nd album, Ignition, became an underground hit, setting the stage for the huge success of their 3rd album 1994's Smash which paved the way to radio success. The Offspring were played on both alternative and album rock stations, confirming their broad-based appeal. Five successful gold and platinum albums followed: Ixnay on the Hombre; Americana; Conspiracy of One; Splinter; Rise and Fall, Rage and Grace; and Days Go By. The band’s 10th album was their first in 8 years. But 2021 was the year that SoCal legends released their blistering new album Let the Bad Times Roll. Album highlights include the title track which takes a critical eye at the state of America in recent years, the devastating urgency of The Opioid Diaries, and the horn-fueled skank of “We Never Have Sex Anymore” a song that nods to the band’s cheeky humor. The Offspring have sold more than 40 million albums worldwide, won countless awards, and have toured consistently, playing more than 500 shows in the last decade alone. The band’s music has had a lasting impact across film, television, and gaming and continues to make its mark on pop culture today.