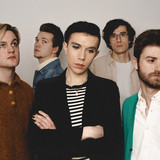 Combining fresh, modern sensibilities with the influence of ‘80s yesteryear, August Hotel has established itself as one of Chicago’s most energetic and insightful bands. August Hotel has been playing together since 2016 and released their first EP, Charms, in 2017. After an extensive schedule of live shows—sharing stages with the likes of The Academic, Urban Cone and Nightly—the band took a step back to record new music, embracing their evolution and new experiences. More than two years later, August Hotel’s forthcoming second EP, Stations, has come together with four new songs that expand on the group’s ability to weave together each member’s specific musical background and influences. Constantly progressing as individuals and as a band to produce captivating and complex tunes, August Hotel is poised for a breakthrough. All photos by Cassie Scott.