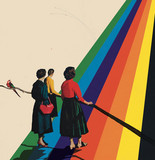 Bruno Jorge de Oliveira Pernadas (born 9 December 1982 / Lisbon) is a Portuguese Musician, Composer, Arranger and Producer. He has a degree in Music by the Superior School of Music of Lisbon (ESML) in Jazz department. During his studies he participated in several workshops, masterclasses and orchestra internships with musicians and composers from all around the world.   Bruno Pernadas has released four records so far on his own name: How can we be joyful in a world full of knowledge (2014), Those who throw objects at the crocodiles will be asked to retrieve them (2016) and Worst Summer Ever (2016), bringing together several music styles such as jazz, space age pop, folk, world music and electronic. The records were critically acclaimed, gaining massive positive reviews and were named Best Record of the Year in several music magazines and Portuguese and International music reviews. He has also recorded with several bands as a co-leader and as a sideman.   As a freelance-musician, he works with different bands | In 2018 he record the debut album "Ilha de Plástico" by Montanhas Azuis, he has also produced the fourth album for the Japanese Band Kikagaku Moyo named Massana Temples. In mid 2010’s, Bruno Pernadas branched out into Composition more seriously, creating innumerous original soundtracks for Film, Television, Performing Arts, Theatre and Contemporary Dance.   Bruno Pernadas new album “Private Reasons” has been released in 2021.