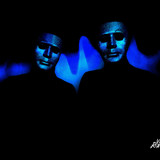 Launched in 2020, after a long time away from creating music together in Enochian Theory, lifelong friends Sam Street and Shaun Rayment began crafting original material once again for public release. The English duo insisted on working without influence from outside pressures or expectations, so their new creative outlet was kept in secrecy until they were ready to release any material. Final production took place throughout 2020 at Shaun's recording studio (SDR Audio Production), making a record completely by themselves, exactly how they wanted to, with full control of the whole process from start to finish. "With the sound of the production we wanted to capture the warmth, smoothness and dynamics of some of the big records made in the late 80's and 90's, but with the clarity of music made today. We used a lot of old techniques but in a modern way". When the time finally arrived to take what they had been nurturing into the world for others to hear, they wanted to remain true to their important vision of not wanting anything to come before the music and how it's presented. “We want people to focus only on the music we create, too much attention continues to be placed on image and personality, therefore we have decided to distort our identities for all public appearances associated with this project”. The debut album “Infinite Elbow” released 16th October 2020. Available on all Digital platforms, + limited CD and Vinyl editions directly from the bands store.