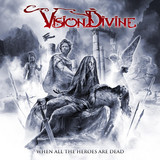 VISION DIVINE were formed in 1998, originally intended as Olaf Thorsen's solo project (Labyrinth's guitarist at that time). Along they years they evolved and developed their style, making their Power-Prog Metal more various and complex, but still keeping their melodies and song constructions, which became a true trademark.Along several line-up changes, their name and style has become recognizable all around the world, making them reknowned for being one of the "prime movers" of that nowadays is considered to be the " Italian Power Metal" and still holding the line.From 1998 to 2019, the band has released the following albums:Symmetry (Promo EP) 1998Vision Divine 1999Send me an Angel 2001Stream of Consciousness 2003The Perfect Machine 2005Stage of Consciousness ( Live DVD) 2005The 25th Hour 20079 Degrees West of the Moon 2009Destination Set to Nowhere 2012Angel of Revenge ( Single) 2018 When all the Heroes are Dead 2019