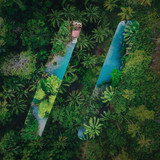 Blitz//Berlin is a band of experimental electronic and neo-classical composers from Toronto. In the past two years members Martin Macphail, Tristan Tarr and Dean Rode have seen a meteoric rise into the world of international film and TV music, earning numerous accolades and awards from around the world. From composing the music for the new "Blade Runner 2049" prequel film “Nexus Dawn” starring Jared Leto, to creating the music for the movie trailers for “50 Shades Darker” and “The Girl On A Train”, in which the band won a Clio Award, Blitz//Berlin are unstoppable. The new album, "Movements II” is the follow up to the JUNO Award nominated "Movements I”.