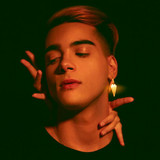 Queens, New York-native, Joshua Batista aka ninjoi., eases the pain of the world with melancholic tracks for the soul. Heavily inspired by the mellow jazz hip-hop imported from Japan during the early 2000's, ninjoi. channels his love for Nujabes and Michita in an effort to guide his listeners through an introspective and reflective journey. ninjoi.'s appreciation for the piano shows through his work. Often utilizing comfortable melodies juxtaposed by sorrowful chord-progressions, the music both lifts & breaks the heart. In addition to mellow beats, ninjoi. now eases his voice into his tracks to create a closer connection to his listener. Through concise, yet powerful lyrics he is able to add a new dimension to the sound of the music. ninjoi. aims to heal many and make the world a better place with his music. ninjoi. completed his first US Tour with Kero One earlier in 2019 hitting 10 cities and recently completed an Asia Tour playing in 12 cities in China, 1 show in Taipei, and 1 show in Tokyo to much success. ninjoi.

recently released his latest album, physically, 'Masayume' through infamous record label P-Vine in Japan with several stands in Tower Records and across the country. He has also recently been featured on TBS Radio, Japan