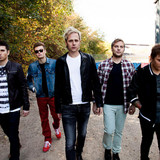 The Minneapolis, MN-based quintet Quietdrive formed in 2003 when friends Brandon Lanier (drums), Droo Hastings (bass), and Justin Bonhiver (guitar) heard some MP3s posted online by singer Kevin Truckenmiller and contacted him about starting a band. Truckenmiller agreed, bringing in college friend Matt Kirby (guitar, vocals) to complete the group. Quietdrive then spent the next year and a half touring around the Midwest, gaining attention both from their live show and their MySpace site. Shortly after signing to Epic in late 2004, Quietdrive changed their name to "Sneaker 2 Bomb," but recanted the decision before their debut album, When All That's Left Is You, was released in 2006. ~ Marisa Brown, Rovi