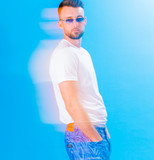 Jafunk, the music producer and DJ from Australia now based in Berlin is known for his funky & soulful music. His remix of Set Mo's 'Chasing Forever' put him on the map with over 4 million streams on Spotify, and he has followed up with a host of singles receiving millions of streams. His music has garnered international radio play on stations such as BBC Radio 1 UK,

Radio FG France and Triple J Australia, and has been featured on tastemaker channels such as Majestic Casual, The Sound You Need, and Selected. In 2019 - pre Covid - Jafunk played shows in the UK, Germany, France, Japan and Australia. He is also known for his sample packs on Splice 'Future Funk & Soul', which have received over 650K downloads. After dropping a smash single 'The Baddest' in early 2020, Jafunk followed up with a ridiculously funky track titled 'Fool For You', which reached number one on the Hypreddit Funk Chart, and held the number 1 position on Spotfy's Nu-Funk Playlist for over 5 months. With 1.5M Spotify listeners / 6.7M streams in 2020, 2021 is set to be a big year for Jafunk!