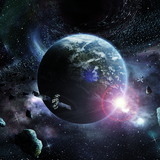 The Void was formed in 2006 in Szeged, Hungary. In the beginning, the main genre of our music was melodic death metal but later on we started to turn towards a more industrial aspect of metal music. Synths and samplers got a more important role in our songwriting. Our previous album ‘Unraveling’ released in 2013 was the first where we started using these elements, but our newest album titled “Nullified” is the one where this influence is the most spectacular. We would not want to categorise our music but if we should, our main influences would be Arch Enemy, Soilwork, Fear Factory and Scar Symmetry.