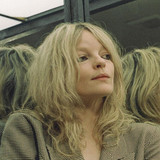 After a collection of demos and early studio recordings (Jessica Pratt, Birth Records, 2012) earned her a small, dedicated audience, Jesica Pratt moved from San Francisco to Los Angeles and recorded her first intentional album in her bedroom in a matter of months. That album, On Your Own Love Again (Drag City, 2015), would bring her around the world many times, leading many to fall under the spell of Jessica Pratt the performer, the songwriter, the singer with the heavy-lidded voice that feels alien and familiar at the same time. Her third album, Quiet Signs, finds Pratt's songwriting and accompanying guitar work refined -- more distinct and direct. Songs like "Fare Thee Well" and "Poly Blue" retain glimmers of OYOLA's hazy day afternoon spells, yet delicate flute, strings sustained by organ arrangements, and rehearsal room piano now gesture towards the lush chamber pop and longing of The Left Banke. On the album’s first single, "This Time Around," Pratt hits on a profound, late-night clarity over just a couple of deep chords, evoking Caetano Veloso's casual seaside brilliance. Jessica Pratt is not a loud performer. She does not have to be. In a club of a few hundred, even the bar staff are known to go quiet while she's on stage. Quiet Signs feels like a distillation of this power. The album leads off with "Opening Night," an emblem of where this spare, mysterious collection of songs falls in the course of Pratt’s career.