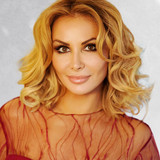 Giada Valenti is an award winning singer and songwriter, born and raised in Venice, Italy. She is most known in the United States for her stunning television special “From Venice With Love” on PBS Television. But her career started in Europe where she was signed as a young singer with record label Sony BMG and had hits climb directly to the top of the charts. For the past 15 years Giada, currently resident of Las Vegas, has released her CDs "And I Love You So, "Italian Signorina" and "My Lullaby" garnering rave reviews. She has been featured morning shows on ABC, CBS, FOX and NBC television. The people of Italy continue their love with Giada, particularly the press who continuously following her career and cover on Italian media and television. In November 2017 she made her debut in Las Vegas with a concert at The Smith Center for the Performing Arts, where she has become a regular. In October 2018 she made her debut at Carnegie Hall in New York City, where she returned by popular demand in 2019. An other highlight of 2019 was being asked by Andrea Bocelli to sing with hime at a concert benefitting his Foundation. To stay in contact with her fans during the COVID19 Pandemic she started March of 2020 a live video streaming series, entitled Giada Live, which can be watched on YouTube, Facebook and Periscope.