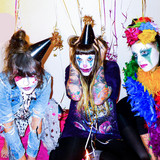 Punkrock trio from Stockholm Heavenly distorted guitar. Trashy drums. Filthy ol’ synthesizer. In the beginning of 2014 some noisy shit started to go down in a nuked out cave in Södermalm, Stockholm. And it went fast. Three old friends found each other in a new constellation. New melodies, new beats and new noise. The new band turned out to be S N A K E. It took Snake just a month to secure their first gig. And then the bookings started to poor in from all over Sweden, from Umeå in the North to more southern. In 2014 they’ve shared the stage with obscure acts like the Chinese punk terrorists Fan Zui Xian Fa, as well as hipster media darlings like Bass Drum Of Death. And in late april 2015 they supported Refused at Debaser Strand in Stockholm. Snake released their first full album "Cradle of Snake" in october 2015. Recorded/mixed by Stefan Brändström at Studio Dustward, released at Sounds Of Subterrania. Followed by a european tour in late October / early November 2015. Snake won the price "Year's Rock" on the Manifest Awards in Stockholm 2016.Snake are now releasing their first single FALLING since 2015!