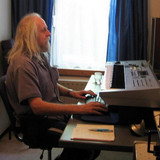 People, moods and music: Three essential parts of life. After early radiotunes and stars, local fanfares and father “Papa Joep” as pianoplayer. I was really startled by the vivid blooming of the Beatles. Output and input, leading to an adventurous musical symbiose. From then and there, sharing with brother Peter, the countless follow-up, to start with the Rolling Stones enriched all our days. From Jethro Tull to Gentle Giant, from Cuby, Focus, Eagles, Jimi Hendrix, Little Feat, Steely Dan and Stevie Wonder, Michael Jackson, Prince to Kraftwerk, to drop some names, to mention some admired examples. In real life sons John and Paul, persisting to upload some selections of my musical legacy; And friends like Herman, Sjaak, Alois, Jos, Peter Johan, Karel and Robert encouraged me a lot. AT2 (from 1982-1984), our local (Groesbeek) popgroup with singing sisters Ans and Rita Dirks, late bassbrother Sjaak, and also late drummer Max Joosten, completed with the late experienced guitarplayer Bob Pistoor, was a 3-years vehicle for musical ambition. passion and joy. Especially the adventure, curious for different sounds and phases have always been driving me to research and develope, bringing out what all the sources have given me. By the way, my name is Ton Weijers (Krypton).