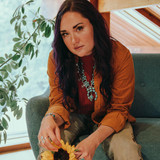 Kayla Williams is a Central Alberta based singer/songwriter who unabashedly loves pop music! Her sound is characterized by catchy melodies and full harmonies, layered over a backdrop reminiscent of decades past, pulling from the ‘60s to the ‘80s. Her love of oldies music is represented by her soulful vocals and thoughtful lyrics, while modern influences are clear in her songwriting. She pulls inspiration from bands like The Temptations, The Beach Boys and Fleetwood Mac, sounding similar to contemporary artists like Ralph, Leon and Lianne La Havas. Her single, “Stealing From My Youth” (October 23, 2020), was recorded with JUNO Award winning producer Spencer Cheyne (Jocelyn Alice, Brett Kissel) from OCL Studios. “I wrote this song in the midst of the chaos when we were mostly housebound,” says Williams. “In many ways, not being able to live life 'normally' felt like there were days being taken from me, like the pandemic was stealing from my youth”. Over the past three years Williams has released three singles (“Something Right” 2019, “Parking Lot” 2018 and “One More Dose” 2017). "Something Right" was specifically written for the 2019 Canada Winter Games and was performed in front of an audience of over 8,000 at the closing ceremonies in Red Deer and broadcast nationally on TSN. Kayla was also one of 11 Western Canadian musicians invited into Canada's Music Incubator’s AE West professional development program at the National Music Centre (Nov-Dec 2019).