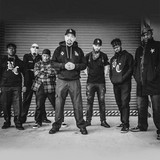 Fury over the song "Cop Killer" made their debut album a symbol for everything that was wrong with popular culture. Body Count released their second album "Born Dead" in 1994. The band recorded a third album "Violent Demise: Last Days" in 1997 sadly drummer, Beatmaster V fell victim to leukemia early that year. In 2005 the band was revived and started to play live shows once again. "Murder 4 Hire" album followed in 2006. In 2012, Ice-T announced that the band had signed to Sumerian Records, and released their fifth studio album, "Manslaughter" in 2014. In December 2016, the band issued the politically charged "No Lives Matter," single from Body Count's sixth studio "Bloodlust" which was produced by Will Putney and released on March 31, 2017 which earned the band a Grammy nomination for the song "Black Hoodie." The band unleashed their seventh studio album "Carnivore" on March 6, 2020 on Century Media Records which got them their second Grammy nomination and first Grammy Award for "Best Metal Performance" for the song "Bum-Rush." Body Count is scheduled to perform selective U.S. live shows in 2021.