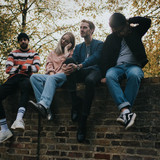 Circumnavigate are an Oslo hailing alt-pop 4 piece, now all based in London. Showcasing a captivating blend of Nordic soundscapes mixed with modern influences such as Bon Iver, Aurora & Billie Eilish, the band have carved their own way through the genre, allowing them to claim their space. November 27th saw the release of ‘Keep a Moment’ - the 3rd single from the bands upcoming EP, due 2021, featuring strings from The Parallax Orchestra (Clean Bandit, Dermot Kennedy, Eminem). This successful release follows on from the band’s 2 latest 2020 singles ‘Layer You Up’ & ‘Shy Love’ which also received industry wide success landing in 5 of Spotify’s ‘New Music Friday’ playlists as well as multiple large editorials; ‘Layer You Up’ quickly became their fastest growing single to date with 30,000 streams in its first week alone, where ‘Shy Love’ was picked up for sync placement by major Scandinavian bank, DNB. The band have been championed by BBC Introducing, NRK P3, RBB & Amazing Radio who continue to support them on their radio shows. Articles in Euphoria, Nothing But Hope & Passion and Clash have all tipped the currently unsigned band for big things in 2021. “It’s SO good! This band have been added to some of the biggest playlists in the world, they’ve got so many streams already and deservedly so! A beautiful fusion of the kind of soundscapes of Billie Eilish and Bon Iver. I love it!”  - Sarah Gosling, BBC Introducing