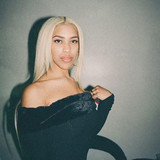 RYAHN is a Singer, Songwriter and self taught Guitarist based in Los Angeles that hails from Sunny south Florida.

RYAHN started out making music in her bedroom when she was 13, until she finally uploaded her first song to SoundCloud and everything changed. After the Organic Success of RYAHN’s first single ‘Baby Boy’ she quickly started to gain fans from all around the globe that would tune in for more of RYAHN’s unique and fresh sound with songs like ‘Popstar’ featuring Producer Sango, and Sad Boy that had a very larger than life sound drizzled with RYAHN’s signature alt-pop twist. In 2018 RYAHN released her first studio EP LIGHT BLUE which was RYAHN’s take on musical therapy and had elements of Alt Pop and r&b. Now after fans have waited over a year for RYAHN to grace them with a new official release she is finally Back and better than ever with a new hot single that will make you wanna dance like no ones watching. Take a step into RYAHN’s world and find out what happens next!