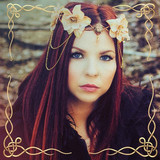 From the rugged coast of British Columbia, Canada, metal songwriter LEAH is turning heads across the globe. Fans describe her as “the metal Enya” and describe her songs as “Loreena McKennitt meets Delain”. In a sea of mediocre symphonic metal, LEAH stands out not only with her magnetic twist of Celtic and World influences but also her well-known ethereal vocals. Her debut self-released album Of Earth &amp; Angels received international critical acclaim, landing her on “The Best Symphonic Metal Album” Metalstorm Awards for 2012. Otherworld (EP) was released in 2013 [re-issued in 2014 through Inner Wound Recordings] and features the vocals of guitar legend Eric Peterson [Testament/Dragonlord] on the ethereal metal track, “Dreamland”. 2014 was a successful year for LEAH as she raised over $27,000 through Indiegogo via her fans to record and produce a new full-length album. LEAH released Kings &amp; Queens in early 2015 through Inner Wound Recordings, receiving dozens of four and five-star reviews, and gaining thousands of new fans around the world. Most recently, LEAH raised $87,000 through Indiegogo and her shop to launch her new album, "The Quest" on October 5th, 2018. This new album has a much deeper Celtic and Fantasy connection, prog moments, yet still embraces classic Symphonic Metal. LEAH achieves her success having never done a tour in her entire musical career. She hopes to tour one day, but in the meantime plans to continue her path as a recording artist and songwriter.