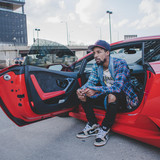 To some, life is all about the journey—destination be damned. Not so for Rockie Fresh. Since his rise as a whip-smart up-and-coming teenage rapper from Chicago to mixtape-slinging signee and Rick Ross protégé with Maybach Music Group in his early 20’s, Rockie has always known where he was headed and what it would take him to get there. And now, at only 27, freshly signed to Rostrum Records and on the heels of a fistful of smash records, his new hit single “Must Be" featuring Chris Brown, epic collaborations with some of the biggest names in the game, and huge-selling tours, Rockie Fresh has arrived at his biggest belt-notch to date.