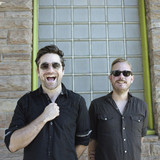 The indie wars are over, and lunatics have taken over the asylum. Based occasionally in Melbourne, Los Angeles and the UK. Led by singer and songwriter Joe Nuttall, Enola Fall are the best of Tasmanian indie. Soaring like an Antarctic mountain range, and darker than a carload of assholes. THERE IS A LIGHT THAT NEVER GOES ON is out now. BLOODHOUND is coming to vinyl. A brand new album is due for release in late 2021, and the band is currently working on a film soundtrack for summer 2022.