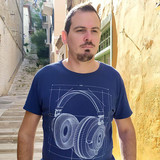 Michalis GS (Michalis Giounanlis) is music producer and dj. Born in Athens, he studied piano and advanced theory. In 2010, he began writing his first songs and in 2013 Giorgos Laskaris’ album “Paraloga hatiria” was released by FM Records with lyrics by Spyros Kaniouras. Composition, orchestration and executive production belongs to him. Since last year, he started producing electronic music and making remixes of Greek and international songs. Meanwhile, he is coming up with his own stuff.