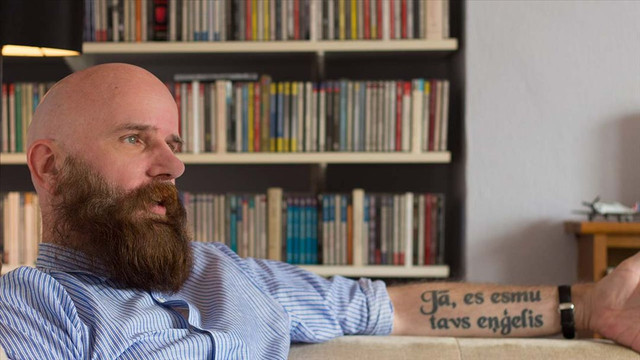 Composer Gabriel Jackson has become an important presence in the revitalized English choral scene in the 21st century, with an accessible yet utterly distinctive style that incorporates such diverse influences as Renaissance choral music, the music of Michael Tippett and Igor Stravinsky, and American soul and R&B. Jackson was born in Hamilton, in the British colony of Bermuda, in 1962. He grew up mostly in England, serving as a chorister at Canterbury Cathedral and then taking up the study of composition at the Royal College of Music. Among his teachers were Richard Blackford and John Lambert. Jackson's choral works began to appear and be performed shortly after his graduation in 1983; among his earlier mature pieces was Ah, mine heart (1987). It was after the year 2000, though, that his music gained traction. Jackson earned a British Composer Award in the honor's first year, in the category of liturgical music, and his works began to appear on programs at Britain's longstanding choral festivals: Aldeburgh, Cheltenham, Spitalfields, and others. An album of Jackson's works appeared on the Delphian label in 2005, and another on Hyperion in 2009. A major breakthrough was designation as associate composer to the BBC Singers from 2010 to 2013, during which period Jackson composed major choral works: a Requiem mass (recorded for Naxos) in 2012 and a Passion for Merton College, Oxford, the following year; the Passion was performed at the Trinity Wall Street church in New York in 2014. Jackson has written music for organ, a piano concerto, and other instrumental works, but he remains best known for his choral music. His innovative text-setting owes much to Tippett. The influence of African-American popular genres in his music may be elusive, but Jackson has pointed enthusiastically to "the chords, the spaciousness, the ecstatic, bright sounds, those things that come from listening to the backing vocals on something like a Luther Vandross record" (as quoted by ClassicalSource). A good example of his style from the mid-2010s is the part song That wind blowing and that tide, for treble voices, saxophone, and organ (2015). The year 2017 brought a recording of Jackson's Our flags are wafting in hope and grief on the debut recording of the choir Sansara.