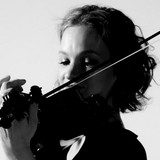 Three-time Grammy Award-winning violinist Hilary Hahn is renowned for her virtuosity, expansive interpretations, and creative programming. Her dynamic approach to music-making and her commitment to sharing her musical experiences with a broad global community have made her a fan favorite. Hahn's eighteen feature recordings have received every critical prize in the international press and have met with equal popular success. Her upcoming album, Paris, will be released on March 5. Hahn has also become known for her engagement with fans, including collecting fan art at concerts, and performing free concerts for knitting circles, community dance workshops, yoga groups, art students, and parents with their babies. She recently created the Instagram project #100DaysOfPractice for which she posted videos of herself practicing for a hundred days straight, openly sharing her behind-the-scenes work with her fans to break down perceived barriers around the creative process. Hahn is an avid writer, having posted journal entries for two decades on her website, hilaryhahn.com, and published articles in mainstream media. Her violin case comments on life as a traveling companion, on Twitter and Instagram at @violincase.