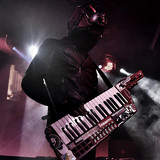 Only one man strikes fear in the souls of the human garbage that walk the streets at night. Only one man is brave enough to take on the pathetic trash that plague our city and prey on the weak, and that man is the Street Cleaner. Since 2012, Street Cleaner has vowed to rid the world of crime and corruption with just his baseball bat and his trusty keytar, one city at a time. An homage to the sights and sounds of the vigilante films of the 80s, San Diego based artist Street Cleaner has multiple festivals and tours under his utility belt. Street Cleaner has had his music featured on television,