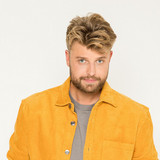 Sporting a wide vocal range and soulful delivery, Sandro Cavazza is a pop singer and songwriter from Sweden who has collaborated with the likes of Avicii, Kygo, and Lost Frequencies to the tune of 2.5+ Billion streams.   Having graduated from the Los Angeles College of Music, his career took off when Avicii heard some of his demos, and the two instantly became frequent collaborators. This early synergy led the pair to co-write two songs – "Gonna Love Ya" and "Sunset Jesus" – for Avicii's album Stories, issued in the fall of 2015. Sandro featured on both. That same year, he also lent his vocals to Lost Frequencies on the tropical house classic "Beautiful Life", which Sandro wrote.   2017 saw Sandro co-write and feature on Avicii's "Without You". The following year, he struck his first #1 solo single, "High With Somebody" and released his first collaboration with Kygo, titled "Happy Now". In 2019, Sandro scored his second #1 with the single, "Enemy".   2020 has seen a steady flow of releases as Sandro has continued to establish himself as one of the most in demand songwriter & vocalists in the pop space. "Forever Yours", a posthumously released collaboration with Avicii and Kygo was followed by "Freedom" and "Beautiful", the latter of which he also featured on.   In fall 2020 he released his second EP, including the #1 single "Lean On Me".

Sandro is currently working on his duet EP