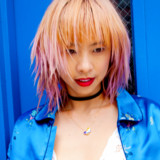 "Unrestricted by categorizations, she's become influential in the art of hybrid bass styles, paving the way for others to step outside their respected comfort zones "

- DJ MAG. “LA-based DJ and music maker whose electronica is a deftly swirled blend of Balearic synths, booming dubstep beats, and spliced vocals–both soul-steeped and electronically pitch-shifted. It’s the kind of music an EDM head and a fan of Purity Ring would fuck with” - Noisey. L.A.’s Fei-Fei is some what of a musical renaissance woman. She manifests “marching to the beat of your own drum” with her genre-bending productions, and has even received death threats for defying some fans’ expectations in her DJ sets, notably Armin Van Buuren's ASOT 500. With releases for Toolroom, Dimmak, and New State, to her official remixes for BANKS, K.Flay, Odesza, and Tiesto, Fei-Fei drops another surprise. In the spirit of independence and innovation, she’s now championing her own sound with her debut, 13 track album Pretty Girls Don’t Hallucinate, reaching #13 on iTunes.