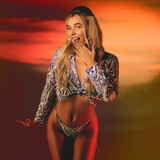 Following an internal muse past expectations, conventions, and boundaries, the gold-selling Mississippi-born and Los Angeles-based singer/songwriter confidently moves to the beat of her own drum. Stepping into the light, Maty embraces an incomparable voice on her 2021 independent full-length debut, The Feeling’s Mutual [MITS Records]. Writing at a prolific pace for herself and behind-the-scenes, Maty penned and lent her voice to Kygo’s chart-topping and gold-certified smash “Stay.” She joined him for performances everywhere, including the 2015 Nobel Peace Prize Concert, Good Morning America and on tour across North America. She dueted with The Weeknd on “Angel” from the multiplatinum GRAMMY® Award-winning #1 blockbuster, Beauty Behind The Madness in addition to contributing “Haunted” to the Secret in Their Eyes soundtrack. Establishing a signature style, her 2016 solo debut EP, Noyes Complaint, yielded “In My Mind,” which clocked over 100 million Spotify streams to date. 2018’s Love Songs From A Lolita maintained her momentum as she toured alongside Noah Cyrus. Along the way, she earned the endorsement of The FADER, Nylon, Complex, Ones To Watch, PAPER, V Magazine, Rolling Stone, and The New York Times.