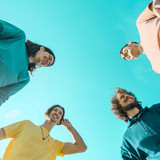 Based in New Orleans, Mighty Brother carves a unique space in today’s modern soundscapes with a distinct mashup of styles that has been described as a “blend of Avett-Americana and Radiohead-esque art rock” (Offbeat Magazine). A menagerie of musical influences led Mighty Brother to develop an indie-rock sound that simultaneously pays tribute to folk, singer-songwriter, funk, and alternative soundscapes with soaring harmonies and striking melodies that knit an eclectic sound, guiding the listener through unconventional grooves and adventurous lyricism. Their upcoming third release - a double album - The Rabbit. The Owl. (July 2020) is an introspective look into the band’s emerging theme of duality in both their music and their writing. Straddling the lines between genres The Rabbit. The Owl. is a prime showcase of the band’s unique musical flair and serves as an introspective look into Mighty Brother’s exploration of sound, concepts, and ideas.