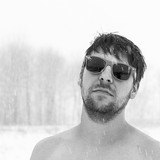 Viking Moses, AKA Brendon Massei, achieves a special balance of warmth and command, with familiar melodies that draw listeners in and oblige them to stay. Strongly lyrical songs are played out through tunes that flirt with pop, soul and Americana, all strung together with a unique pulsing guitar, and by Massei's robust voice, which ebbs from delicate whispers to throaty howls. 20 years and counting, Massei has won over fans and critics with the delicate melodies of his songs, and through his versatility as a performer. The lore of Massei's outsider lifestyle has won him interest and praise. Werewolves Across America (Pulse Films), is a feature-length documentary about Massei's life and lifestyle as a touring musician. Massei's music also features on BAFTA-winning feature film Kelly + Victor. Many notable recording artists have performed Massei’s songs, including Malcolm Middleton of Arab Strap, Devendra Banhart, Phosphorescent, Deer Tick, Slow Club, Castanets, and Adrian Crowley, among others. Viking Moses has worked closely with Jason Molina of Songs: Ohia