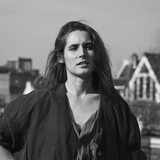 ‘Lewin’ is the fresh musical leaf that has been turned by songwriter and musician Jara Holdert, formerly known as JARA. Her debut album, scheduled for release in 2020, was recorded and produced in Haarlem and Berlin in 2016 with her lover and muse, Aaron Ahrends. What the two of them didn’t know at the time was that the songs that Jara was writing were presciently describing the breakdown of their relationship - months in advance - and indeed, during the post-production process their love fell apart, leaving her prophetic tunes about the impending breakup hanging in mid-air. It took space, time and a new artist name, but Lewin is now ready to present these emotionally-charged and deeply personal recordings to the world.   At the core, Lewin is about being naked, open and relatable. No fancy words or fashionable dresses to hide behind - just the songs, and her voice, vulnerable and brutally honest. With a few precise brushstrokes she calls up scenes from real life - no romanticised ‘true loves’ but awkward, human affairs - love with its rough edges showing.   “Lewin likes to layer songs in the same way that emotions and situations are layered - the things we say, the things we think we know, the things that actually move us, translated through open tunings that inspire a unique mix of intricate lyricism, surprising melodic twists and open harmonies”. Together with Matt Arthur, Lewin also forms an international indie-folk duo: The Coo