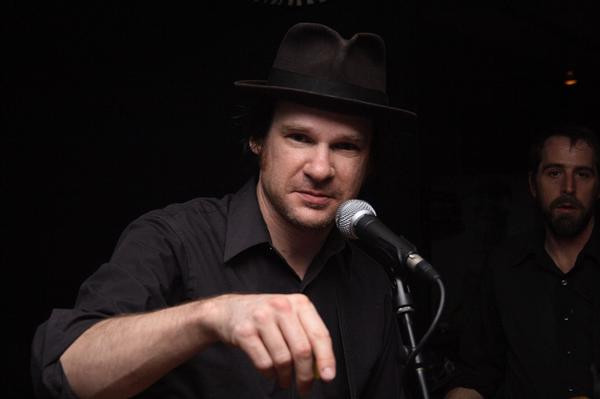 One of the most important figures in the Memphis garage rock and punk-blues community, Jack Yarber (better known by his frequent stage name Jack Oblivian) was a founding member of two strongly influential bands, the Oblivians and the Compulsive Gamblers, and has recorded as a solo artist as well as working with a handful of other notable Memphis artists. With the Oblivians, Yarber and his creative partner Greg Cartwright banged out raw, energetic rock & roll informed by punk and roots music in equal measure, while their other project, the Compulsive Gamblers, boasted a bigger and more unified attack with a similar set of influences in blues and R&B as well as vintage pop. As a solo act, he sounded smoother and more expert on 2006's The Flip Side Kid and 2011's Rat City without surrendering his passion or his edgy conviction. Jack Yarber was born in Corinth, Mississippi in the spring of 1967, and began learning to play guitar when he was in fifth grade. As a teenager, he was into heavy metal and dabbled in punk rock, and in high school he formed a band with guitarist Jimbo Mathus called Johnny Vomit & the Dry Heaves; their original run was short-lived, but the group would periodically re-form for shows and recording sessions in the '90s and 2000s, and Mathus would enjoy commercial success as the founder of the Squirrel Nut Zippers. In 1985, Yarber's family relocated to Memphis, Tennessee and he and a cousin formed a new wave band called the End. The End released a single in 1987, but broke up in 1989 after Yarber's bandmates moved out of town. Shortly after the End fell apart, Yarber met fellow musician Greg Cartwright, and they formed an R&B-influenced garage band, initially called the Pain Killers, which soon evolved into the Compulsive Gamblers. The Gamblers gigged often and released a pair of singles in 1992, but beyond Yarber and Cartwright, the lineup was unstable and the band failed to attract much notice outside of Memphis. The Gamblers broke up in 1993, after Cartwright briefly moved to New York City to work with singer/songwriter Casey Scott, and Yarber spent some time in New Orleans. The summer of that year, Yarber and Cartwright were both in Memphis for a few days and got together to jam with Eric Friedl, who worked at local music store Shangri-La Records. With the three musicians trading back and forth between guitars and drums, they came up with a set of raw, minimal rock & roll tunes and called the new band the Oblivians, with the members each adopting "Oblivian" as their last name in time-honored punk rock fashion. Between 1994 and 1997, the Oblivians released a steady stream of singles, LPs, and live sessions that earned them a potent reputation on the garage punk scene. In 1995, Yarber and Cartwright revived the Compulsive Gamblers as a side project, cutting the album Gambling Days Are Over, and after the Oblivians faded out, they released two more studio albums and a live collection before once more retiring the project as Cartwright formed a new band, Reigning Sound. In 1997, as the Oblivians were coming to an end, Yarber released a solo EP as Jack Oblivian, American Slang, and a full-length album, So Low, followed a year later. In the 2000s, Yarber stayed busy working with a number of Memphis acts, including Tav Falco, Harlan T. Bobo, '68 Comeback, and the Limes, as well as forming a pair of part-time bands, South Filthy and the Knaughty Knights, before stepping out with his own band, Jack-O & the Tearjerkers, later revised to Jack-O & the Tennessee Tearjerkers. The first Tearjerkers album, Bad Moon Rising, appeared in 2001, but it would be 2005 before the follow-up, Don't Throw Your Love Away, appeared. In 2008, the Oblivians briefly reunited to tour with fellow garage punk minimalists the Gories, but Oblivian soon resumed his solo career, releasing The Disco Outlaw in 2009 and Rat City in 2011. With his group Jack Oblivian & the Sheiks, he cut a pair of albums, 2014's Live! and 2016's The Lone Ranger of Love; in between came 2015's Dream Killer, a collection of demos and session outtakes. Another archival set appeared in 2019, Lost Weekend, credited to Jack Oblivian & Dream Killers, which was compiled from years of home-recorded demos of a number of his best-known songs. ~ Mark Deming, Rovi